I’m an indie writer. I have friends who are indie writers. So, when I say, a lot of indie writers write absolute rubbish, I’m speaking with some authority (yes, there are a lot who write truly wonderful stuff, but it’s an unfortunate reality, that there’s a lot who don’t). Therefore, when The Pellucid Witch popped up in my feed, although I was instantly drawn by both the stunning cover and intriguing title, I saw it was by an indie writer I didn’t know, who hadn’t written a novel before, and I felt my heart sink. It wouldn’t be any good. 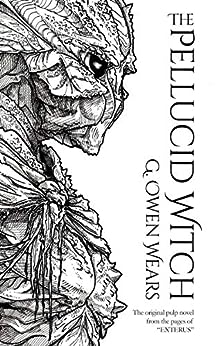 Man, was I SO wrong. The Pellucid Witch is excellent. Better than excellent. Unique, creative, dark, gorey, mysterious, other-wordly, exceptionally well-written, and totally got under my skin (much like a certain fungoid armor!)

Briefly, the premise sees mercenary Kryl, rambling around a devestated dying world, where it seems the sun is about to go supernova. Everything is desert, heat, and danger. Kryl takes meaningless contracts for money, guarding caravans as they traverse the wastelands. He stumbles upon a strange sentient fungus that welds itself to him, not unlike the symbiote in Marvel’s ‘Venom’ series. With his new armor in place, Kryl becomes something of a legendary fighter, capable of killing multiple foes in quick succession. However, he remains quite a moral figure, and when he gets drawn into the world of the mysterious, and machiavellian Pellucid Witch, you can see how her deadly whims and capricious nature sit at odds with his morality.

Like a cross between Andrzej Sapkowski’s ‘The Witcher’ series and the ‘Riddick’ movies, The Pellucid Witch is gritty, alien, and – at times – beautiful (I’m thinking here of the relationship between Kryl and Ailea). The world-building is clever and rich, the characters flawed, and fleshed out, multi-layered and intriguing. If I had to quibble, it would be that the book could benefit from a more thorough edit, but the few wrong words in places certainly do not detract from a brilliant read.

I highly recommend The Pellucid Witch, especially if you’re a fan of dark fantasy. This is one you do not want to miss. Plus, just look at that cover art! Author G. Owen Wears, who has written various anthologies, has demonstrated his writing chops with The Pellucid Witch, and you can bet I’ll now be checking out his anthologies.