I’ve been long awaiting to start Book 3 in the Rose Shield series – Farlander’s Law – by the very talented D. Wallace Peach. I finished it yesterday and was so thrilled I had to compose a review straight away.

Without any more preamble, here goes… 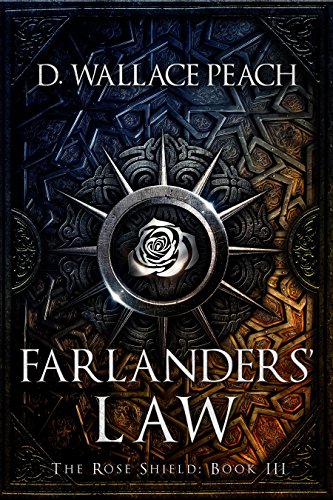 Book III in the Rose Shield series was – in my opinion – the best book in the series so far. The land of Ellegeance has become lore, the background of key characters fully established, so now, author D. Wallace Peach really lets fly with the story – and this one is a gripping, engaging instalment.

Whereas books I and II were more about Catling’s journey, Farlander’s Law is Whitt’s book. Previously, that might have put me off, as I was enamoured with Catling’s story and hadn’t yet fallen for Whitt. However, in Farlander’s Law, Peach fully realised her main male protagonist, and guess what – she made me fall in love with the heroic, self-sacrificing Whitt. What an endearing character!

I say this book is Whitt’s book because a lot of the story (and copious action) surrounds Whitt, however Catling and the other cast of characters do get their parts to play. In fact, one of the best parts of the book – in my opinion – happens early in the piece, when Catling, suffering from unimaginable grief, visits Markim-Ava, the Poisoner, and endures another session with the maker of woads. Peach’s description of physical and emotional pain is truly second to none, and in her cryptic sentence – “She surrendered to death’s companionship, accepted its amoral nature, and exhaled, her body limp.” – I sensed something a little bit dark in our Catling… something that makes me wonder if maybe she might not be the hero of the book after-all? Is Peach building Catling up to be a dark-horse? An anti-hero? I’m dying to find out!

Again, we were treated to endless machinations and politics as the rulers and power-players of Ellegeance played their games with the lives of their subjects. I was thrilled when Catling bit and told Gannon what she really thought of Queen Lelaine (that girl needs a slap upside the head! ). It was also great to see a new power-player – who’d previously only lurked in the background – step forward and make their presence known – the Cull Tarr. I wonder what they herald for Ellegeance, especially in light of Catling’s burgeoning new powers… and I think it can’t be good.

Speaking of the Cull Tarr, one of my favourtie lines in Peach’s book comes from her observation on the Cull Tarr religion – a commentary which could be applied to any religion;

“Their messages always struck me as confusing and contradictory. I don’t know anyone who takes them seriously.”

“When their sermons are of use, they are the truth,” Shafter said.

I won’t go into the story-line of Farlander’s Law here – you’ll have to get it and read it for yourself – but I will close by saying, if you hop into Peach’s world, you can expect rich characters, a complex story-line and gems of writing like this; “The rain relented, and woolen clouds pillowed the ebony sky, the moons and stars secreted from view.”

So why are you still here? Go get Farlander’s Law right now!