Dear Mae Clair, over at Story Empire, posted an interesting commentary on the five books that had an impact on her; essentially the books that helped make her, well, her!

It got me thinking about the things that have made us. The books that influenced our writing, the movies that shaped our views of the world, the tv shows that leaked into our subconscious and then consequently dribbled into our creative works.

So, I’m asking… what made you?

This week – Books – what Top Five books most impacted on your life?

Following are the Top Five books that captured my imagination (all covers chosen to reflect the actual copy I had), made me fall in love with reading, and started me on the path toward writing. In no particular order…

Ok, I said ‘in no particular order, but I lied. This is it. THE book that made me fall in love with fantasy, reading, and most importantly, the anti-hero. This series blew my mind about swords and sorcery, magic and dark magic, and the power of friendship and fellowship (even more so than LOtR).

But, as alluded to above, it was this book/series, that introduced me to the character archetype of the anti-hero – an archetype that would go on to pervade all my written works from then on. Raistlin Majere, the cold, cynical, ruthless mage, who treated people like crap but had the power to save the world, became my most favourite character ever (and still pretty much is). I haven’t read this series in many, many years so I can’t say how it holds up now, but I can honestly say, I wouldn’t be who I am – or write what I write – without this book. 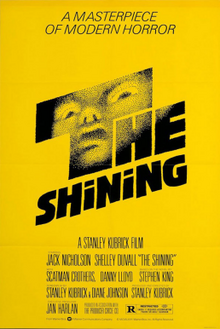 I kind of imagine The Shining to pop up on every writer’s Top Five list. Almost any early King would have a welcome place in my Top list, but it was The Shining that opened my eyes to horror (and kept them open at night when I was trying to sleep!). Horror would in some way go on to impact all my writing – I’ve never shied away from gore or the supernatural, and this I attribute largely to King and The Shining.

Once again, the anti-hero archetype lurked in these pages – though Jack Torrence swiftly descends to straight-out villain by the end – but the idea of a main character who isn’t a Mary-Sue good-guy just leaped off the pages and made me say, yes! That’s what I want to do! A solid starter to any young writer’s beginning.

I’m one of the few people who actually prefer The Hobbit to LOtR. It could be to do with the fact that I first read The Hobbit when I was still in single digits, and afterwards, I tried reading LOtR, only to find the language completely beyond me. Or it could be to do with the sweet, whimsical nature of The Hobbit compare with the sweeping epicness of LOtR. Don’t get me wrong, I love grand sweeping books, but there’s something so self-contained and satisfying about a one-off fantasy romp that The Hobbit delivers.

Then there’s Gollum. Who didn’t fall in love with the horrible, wonderful creature that is Gollum? I also got strangely attached to Bilbo which is unusual for me – I don’t usually love the good guy, but his unwilling, kicking-and-screaming, reluctance to be part of the adventure just won me over. I still love Bilbo more than Frodo.

And The Ass Saw The Angel – Nick Cave

This is going to be an odd choice for the Top Five list, and I daresay most of you won’t have even heard of this one. Nick Cave is an Australian singer, often affectionately nicknamed the Prince of Darkness. His music and lyrics are pretty bleak and often feature murder, death, grief etc. Suffice it to say, in my younger years, I was a HUGE fan.

Then I found his book. Now, if I were to reread it today I’d probably say it’s no literary great, but in my teens, this book went to the dark places most other books only hint at. It was responsible for some of my most twisted, bleak poetry, and still shapes a lot of the darkness in my writing today. This is one of those books that without it in my formative years, I have no doubt I wouldn’t be a dark fantasy writer!

Battleaxe is the first real adult fantasy book I read. The Hobbit and the Dragonalance series, while sometimes straying into adult areas, still felt quite kidsy (or young adult) at times. Battleaxe was the first fantasy book I read that had a made-up world with magic, swords, and winged people, but was seriously for adults. Horror, death, sex, and rape all occur in this series lending it a gravitas that Hobbit and Dragonlance never quite achieved.

This was also one of the first mainstream books I’d read by an Australian writer. One of us who managed to ‘make it’! I was beyond thrilled by the idea that an Aussie could make it out there in the predominantly US and UK world. This was – and still is – one of my favourite series of books. Oh, and did I mention – winged people!

I’ve got to give a shout-out to The Gunslinger by Stephen King. This book didn’t shape me in my formative years – I came late to its glorious pages, but when I did read The Gunslinger, followed by the entire Dark Tower series, the impact it had on my writing was huge.

I’d always been a fan of the weird western genre, but until this series, I didn’t realise how wonderfully that could translate with a supernatural, dark fantasy overlay applied. If you’ve not dipped into King’s opus, I suggest you get out there and give it a go. Seriously good stuff.

Open to you now! What’s been the Top Five books that made you? Share in the comments and stay tuned for next time when I examine the Top Five TV Shows that Made You Who You Are…

28 thoughts on “What Made You? Top Five Books…”